The Oxbow Lake Embankment Dam in Perinton – 1918 vs 2018 Comparison

Here is a photo of the embankment at The Oxbow in Fairport.  It was taken circa 1912. 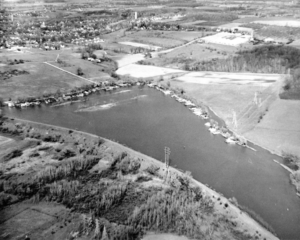 There are several points worth noticing here.

In the center of the photo, the electricity pylon can be seen clearly perched on the top of the embankment. On the opposite side of the canal, the cottages are on a spit of land, the original towpath, with the old canal running behind them. Note the steep embankment slopes and the lack of development in the foreground. There was little thought of failure and flood back then. The urban development of this area below dams is called Hazard Creep

Today, you can see the extent of the vegetation growth left unchecked. It’s interesting to see the Power Authority has cleared all vegetation from the power lines, with no complaints, yet there is a more serious problem with the unsafe embankments.  Note the brown patch just above the ‘map’ square. This looks like the debris left by an earlier embankment breach. 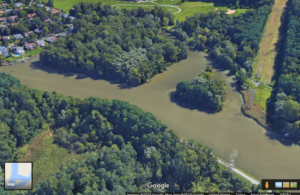 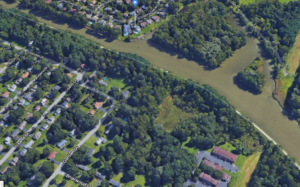 See original 1912 picture below where this same spot is circled. 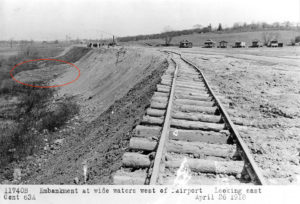 Note how steep the slope is. This flies in the face of all current dam design criteria, as it should be sloped to 30 degrees, not the 60 degrees shown here. Note the fine fill used.

Dam engineers state that this fill should be tamped or rolled to compact the soil. There is no evidence to support this ever being done, and with this steep slope it would have been impossible. Here’s the train used to build the embankment. The wagons tipped the fill sideways. 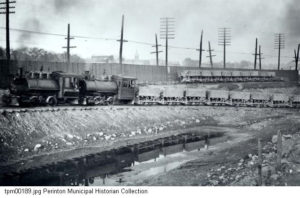