It took awhile but the BIGGEST concerns that the ECNA has had all along with this Unsafe Embankment work appears to be taking shape. Mandatory Flood Insurance, for some Erie Canal Neighbors, is a possibility.

If you have taken any time to look over this new Earthen Embankment Integrity Program (EEIP) draft Generic Environmental Impact Study (dGEIS)  you will see, for the first time, the mention of Flood Insurance Rate Maps and Flood Insurance Studies. Now this is in response to the list of 15 potential impacts resulting from the New York State Canal Corporation EEIP work.

As an Engineer for many years, I can tell you that this is one of those "read between the lines" moments. If the NYSCC is fixing these embankments, making them safer through tree removal and reshaping the slopes, then the question is two-fold. What happens during the clearing process & what happens after the trees are removed?

Equally important to understand is the potential for a third option: What if the community were to STOP these unsafe embankments from being cleared?

Since these are unsafe Earthen Dams, then the answer is clear... Flood Inundation Mapping WILL occur at some time and that is spelled out in this draft as you can see below. It is in response to the 5th "potential" impact this program may see as it tackles the job of clearing 100 years of "poor maintenance". And the solution to each of these impacts is spelled out in a later dGEIS section... Do you see those words: Flood Insurance Rate Maps & Flood Insurance Studies? Now why would these two "remedies" make it into the list is the bigger question. If dams are being worked on there is a temporary FEMA Flood Zone rating that can be used while REPAIR work is ongoing, and there are plenty of websites that explain all this quite well. You can check out some of these below.

But the better question, in light of an active protest group working to stop these safety repairs in the Rochester area, would be this:

What if an Unsafe Canal Embankment Dam is NOT properly repaired and allowed to remain covered with trees and a "live threat" to the surrounding community for a potential flood?

The answer has now been made clear perhaps, by these statements in the dGEIS. These canal dams, clear & safe ones or those that are unsafe and covered with trees, may now start to see REAL work on identifying the Flood Hazard Zones, Flood Inundation Mapping and that information would eventually be passed along to FEMA to see if residents living below those embankments will need to have MANDATORY Flood Insurance through the National Flood Insurance Plan

The information from Dams and Flood Inundation is sourced here: 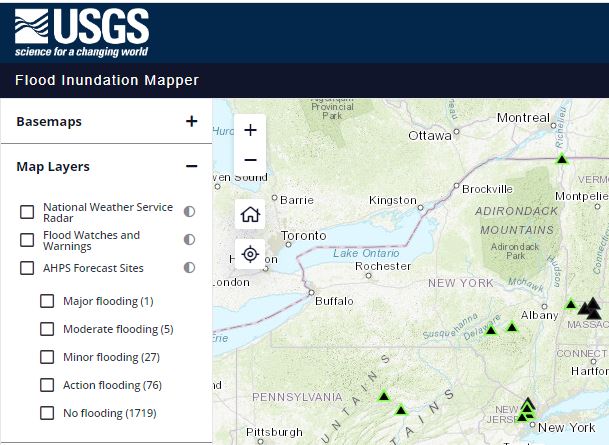 And it's not that hard to understand that living below SAFE dams will reduce the need for a Flood Insurance, while living below UNSAFE dams would require those homeowners to protect themselves until the flood danger is mitigated.

So just a word of caution to those who think that trees should stay on canal embankments because they are pretty or provide shade. There may be a COST to keeping embankment trees coming very soon.

The cost will be National flood insurance policies which normally are 3-5 times higher than a normal homeowner policy. Those costs will be paid by canal neighbors living BELOW these tree-covered dams and ALSO in the miles of Flood Zones extending beyond those embankments. It will hurt many financially, except the US Government, who will be more than happy to sell a flood insurance policy, after all the National Flood Plan is starving for money right now.

And also remember that all those "guests" of the NYS Canal Corporation, who are walking along the top of the embankments on the Empire Trail, can protest all they want about keeping trees. After all, it's not THEIR money that will pay for these policies, it's those folks living below the trail, and these unsafe embankments.

Unless of course the public & Erie Canal neighbors start to get involved before it's too late, and it hits you where it hurts most... your wallets

View all posts by: Doug K