Contrary to what some may think, the Erie Canal is slowly crumbling from lack of proper maintenance.

Here's work from an embankment breach in 2012 - Albion NY

Despite an active Canal Embankment Inspection program being run along the Erie Canal, the overgrown embankment dams became too cluttered to properly inspect. Here's more:

There have been other canal leak issues that have come dangerously close to the Empire State Trail that the trail has been closed in the past due to leaking issues in the Syracuse area.

It's being done through an initiative called the Earthen Embankment Integrity Program or EEIP. You can find information about it at the New York State Canal Corporation's Website

The ECNA, Erie Canal Neighbors Association also has an active conversation about all of these new Canal programs being rolled out across NY state. Click the image to enter the ECNA Forum Page

Here's a great conversation with one of the ECNA Founders on the subject of  Embankment Repair work along the Erie Canal in the Rochester area. 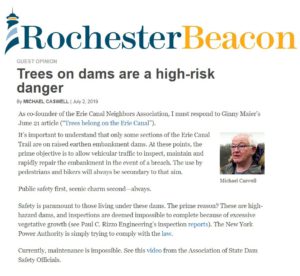 Rochester Beacon : Trees On Dams are a High-Risk Danger

This embankment integrity work has been covered in local Rochester news...and elsewhere.

Though few news outlets are reporting about the stated reason for the clearing work... safety of the Public. They tend to focus more on the controversy around those who are trying to rally for the trees causing the original embankment safety issues instead.

While many people opposing this work are saying that the NY State Canal is just fine the way it is... no issues, no safety concerns. It looks OK, trees and all. Maybe that's their view, but not everyone shares it, especially new owners, the New York Power Authority.

Here's a story from a neighbor talking about issues with a leaking Erie Canal next door, it's not the only canal neighbor with leaks.

The NY Canal Embankments will be cleared, it is a certainty.

The reason is simple... there are many more reasons to keep the embankments clear, all directed towards a safer & more sustainable NY Canal System, than there are reasons for keeping trees in place causing these embankment safety issues.

Clear embankments are easier to inspect, easier to maintain, easier to clean up, and also meet the requirements set for earthen embankment dams by all Federal, State & Local regulations & requirements. Think about it... why wouldn't you remove the trees?

This is a video of a Embankment Safety Video that the NY Canal Corporation created for the Town of Perinton, which has almost 11 miles of the Erie Canal running through it.