The most dangerous Erie Canal Dams are hiding in plain sight

With the NY Canal Corporation's Earthen Embankment Integrity Program entering it's third year it's become apparent to many canal neighbors that the work making these embankment safer is still continuing.

There is an Embankment Dam Clearing Guidebook under development by New York Power Authority (NYPA) & New York Canal Corporation (NYCC), that will spell out what dams gets cleared, when they get cleared, how far they get cleared, and what happens after the trees are gone and the grass is growing.

What else are these Dam Owners responsible for?

Well it seems there are two things at least. They, NYPA & NYCC have to get these "new" dams on the NY State Dam Registry working with NY Dept of Conservation, and also to create something called Emergency Action Plans for their Dams, to share with the communities that live near them. That second task is most likely a joint effort with each Village, Town & City along the Erie Canal from one end to the other.

The Dam Registry is the more important task...

Once these new Earthen Dams are added to the Registry of NY, there should be a follow up activity to understand  EACH dam's Flood Inundation Mapping...otherwise known as the Flood Hazard Zone (FHZ). Based on the topography of the area, and knowing water runs downhill, seeking it's own level, the FHZ can be very concentrated or span miles of lowlands. Residents around these dams need to know if there property is on one of those maps.

This is a Flood Inundation Video of a California Dam that was recently emptied due to safety concerns. Look at how the time lapse shows the extent of the flooding and how far the water travels.

This is what we should be expecting from the NYS Canal Corporation, Dam Owners

There is a Google Maps Database that anyone can use, to show where each NYS Dam is located. If you click the image below you can view this data yourself through Google Maps by downloading the file. 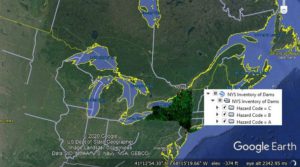 When you open the file you will see Green Red Blue & Black dots... each is a registered NY State Dam, and if you zoom in you can see location & size information by clicking an individual location dot. 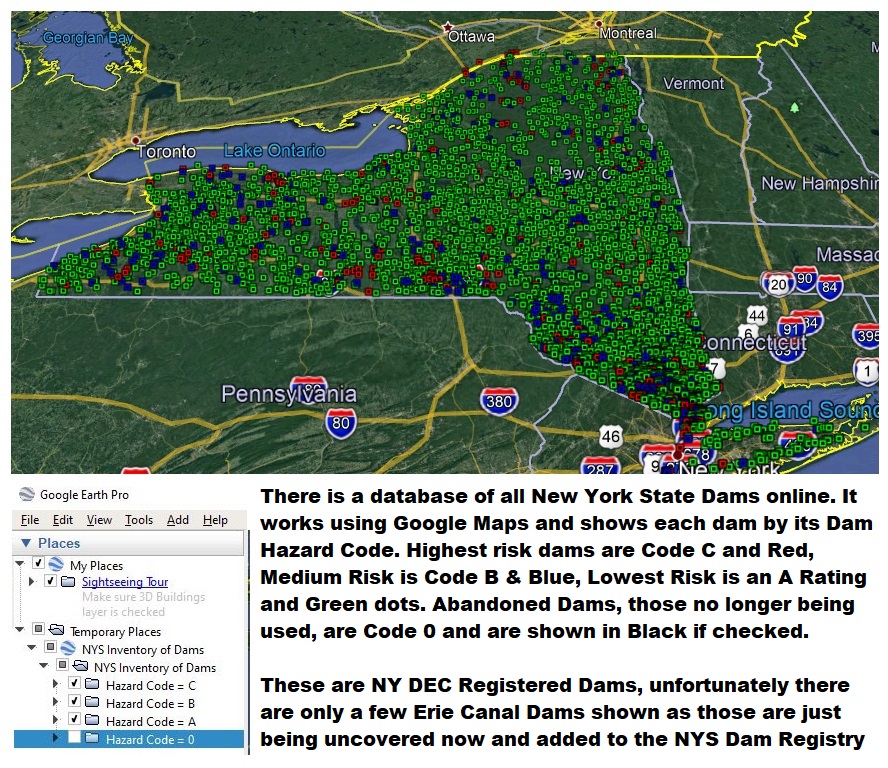 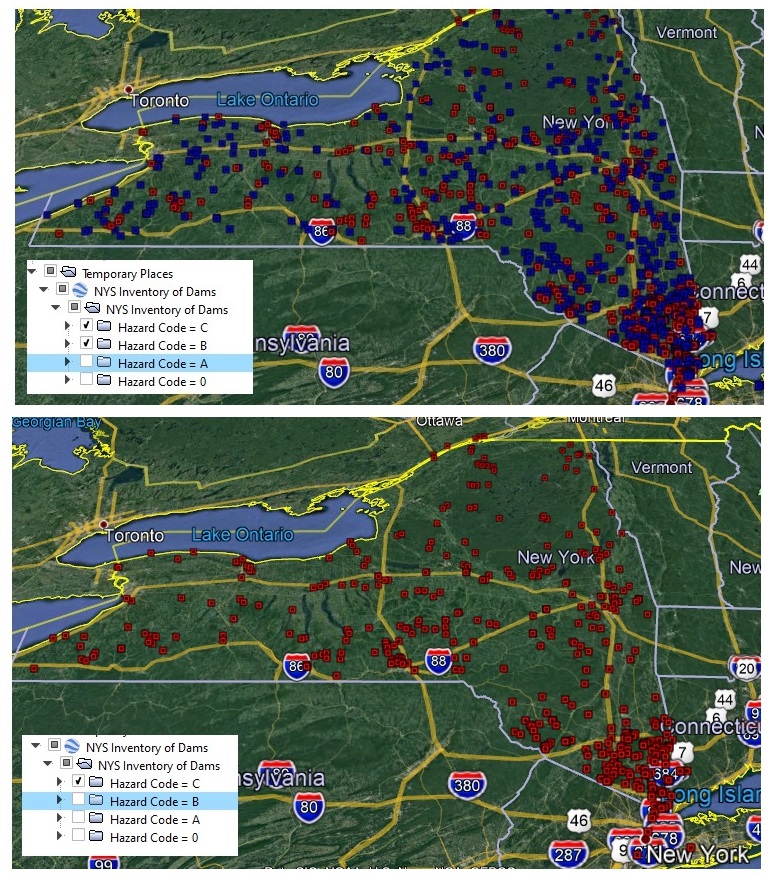 Take a look at the dam closest to your neighborhood, just so you understand where it is. Hopefully soon the new Erie Canal Earthen Dams will be added to the  registry list, many of those now changing color from Red & Blue to Green.

There are many NY dams that are "hidden" still, one of the most alarming is the Holley Falls Dam along the Erie Canal. With this Google Map tool I was able to get some nice images of this area to show why it is CRITICAL that resident along the Erie Canal make sure they know where flood water might flow from. The amount of people in Flood Hazard Zones, that don't know they are in potential danger, is a serious issues now that Erie Canal Dams are being uncovered. Canal Communities need to develop Flood Warning Systems and work with the Canal Corporation on sharing information.

Here are TWO Earthen Canal Dams in Holley... one on the North of the canal that was recently cleared, the other on the South side, higher and covered thick with the wrong vegetation, making this section of earthen dam, unsafe.  By the way, the South Holley Dam has a leaking waterfall coming out of it called Holley Falls. And BOTH dams have a hole in them, a dive culvert or a drainage pipe under the canal to allow Sandy Creek East Branch flow. 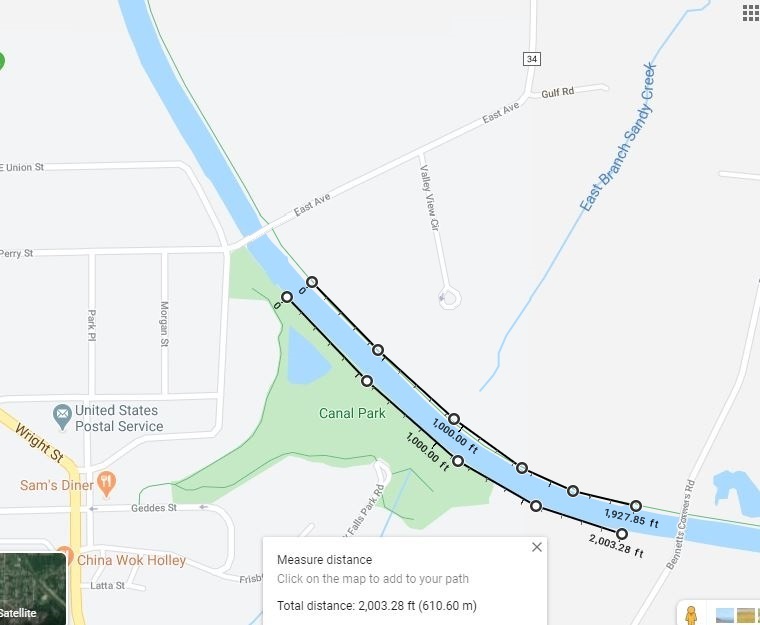 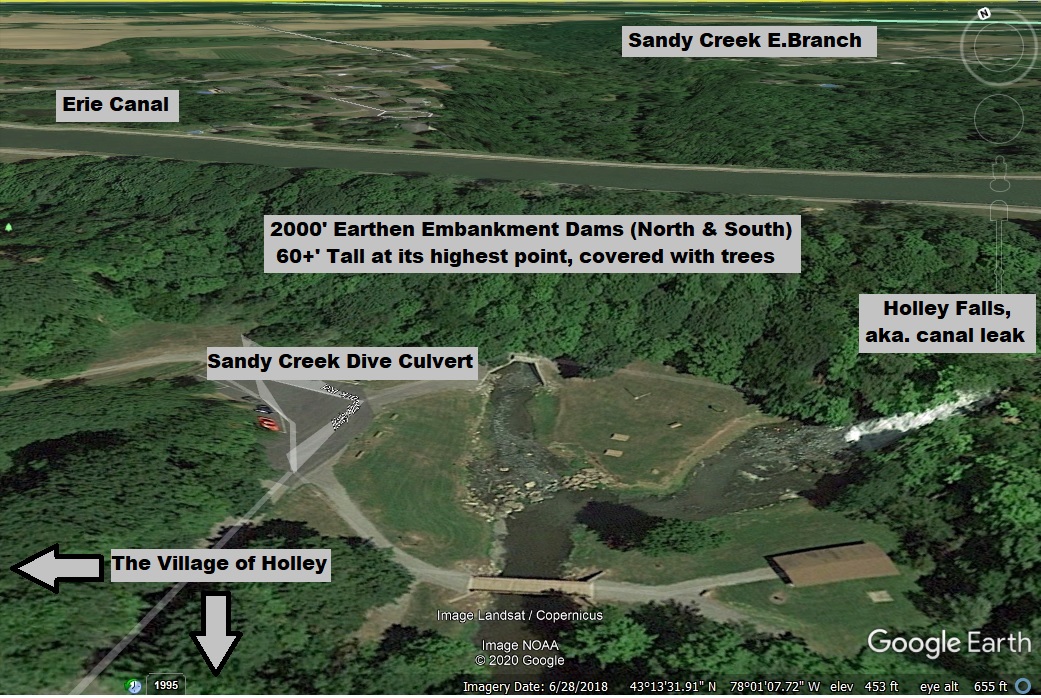 What would the Owners Flood Inundation Mapping Show? Maybe something like this. 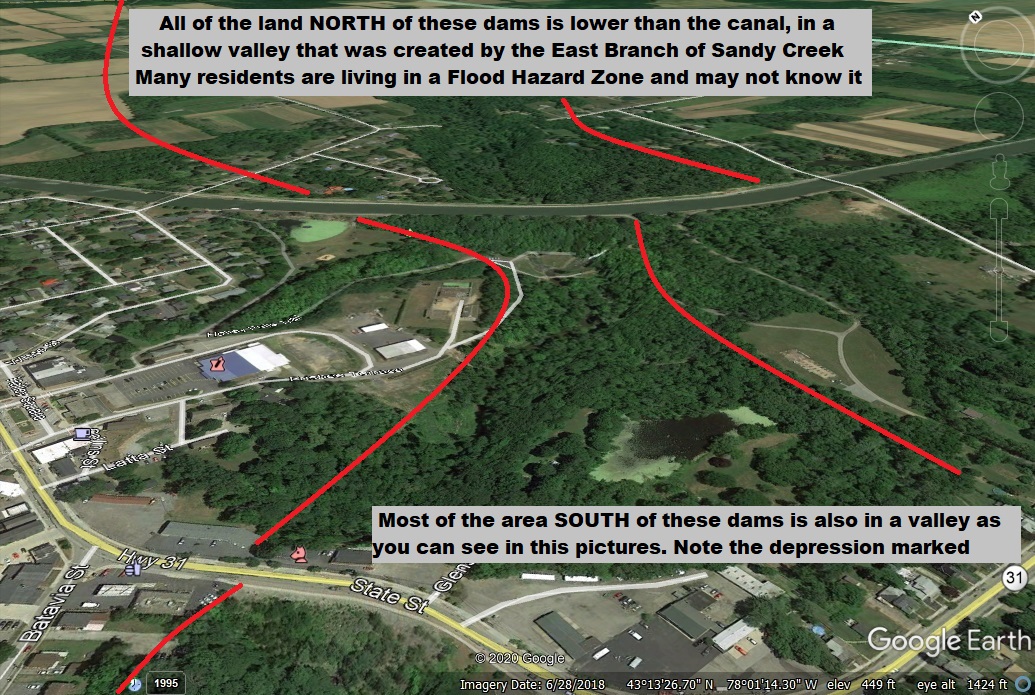 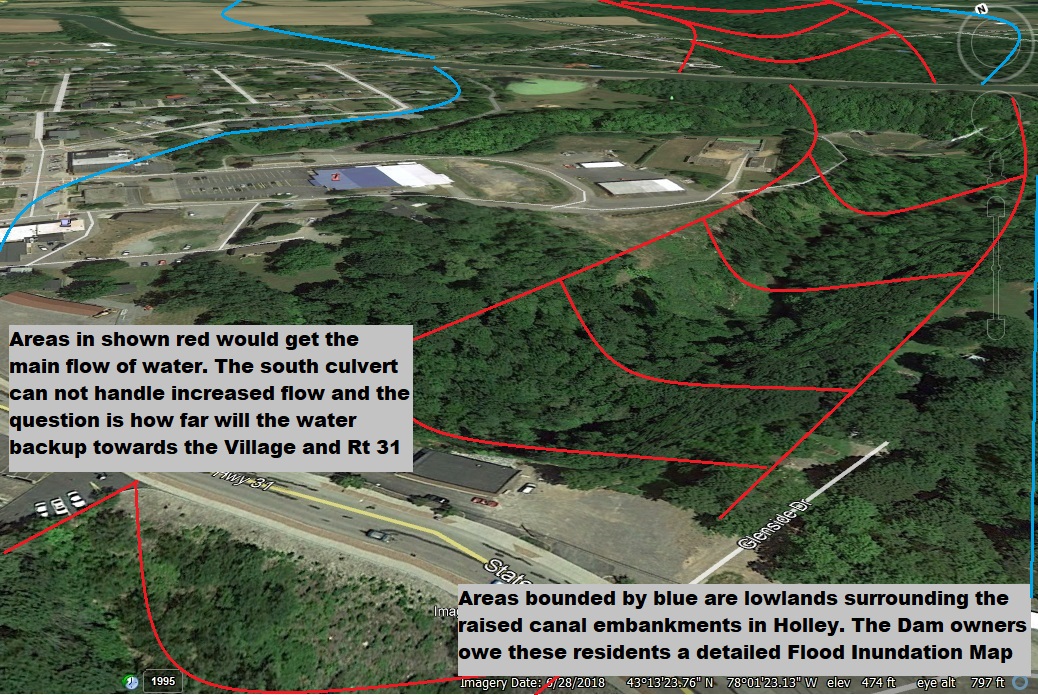 Maybe it's time that MORE people starting getting involved in their own canal communities to help identify the "hidden" Erie Canal safety issues that still need to be uncovered.

Where is the hidden Erie Canal Dam in your Community?

View all posts by: Doug K