There are TWO canal embankments efforts going on right now, divided by where one stopped and the other is about to start.

The first Embankment repair effort is the Earthen Embankment Restoration Project (EERP) and it ran from west of Lockport to east of Brockport. That is about 27 miles along the 125 miles of unsafe embankments that exist along the NYS Canal System

The plan was to remove unwanted vegetation and replace it with something that is approved for the embankment sections along neighboring properties.

You can read about future EMBANKMENT RESTORATION here. It is in the final stages and will have barrier screen planting in the Spring of 2020 after 3 years of work making these dams safer by removing trees, reshaping the slopes and planting grass covering.

The second Canal Embankment repair effort will start in 2020, it's called the Embankment Integrity Program. It will remove trees primarily and some areas may receive a barrier screen but ONLY if those locations qualify for it using the State Environmemntal Quality Review process or SEQR

And it is a major program slated to clear about 100 miles of embankment shoreline, almost 1500 acres of land, over the next 5+ years. Bids have gone out for that work.

The difference is simple...

The first project, the prototype, selected about 50 odd places that were known to have issues with embankment safety, it concentrated on Dam Hazard Ratings and selected all of the highest rating to work on first.

The latter "program" has been expanded to cover not only raised embankments, but all of the shoreline of the NYS Canal System. It is about removing the safety issues of overhanging trees on the water & trail. It will address overgrown embankments & culverts. It will also clear all sluice gates and overflows of old debris and work concrete.

We cover BOTH of these Embankment efforts in our ECNA Forum 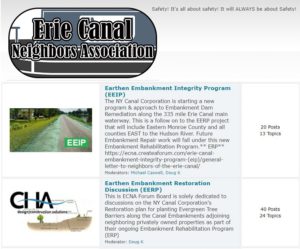