The Dispute about Canal Embankment Clean-up and Environmental Review

New York Power Authority (new owners of the Canal Authority), are being sued by the Towns of Perinton, Brighton and Pittsford, (PBP) in an attempt to stop the vegetation removal from high risk embankments along the canal. This is stopping public safety effort for those towns along the canal.

The case put forward is, as they claim, not about ‘engineering, but about ‘procedure’. You can read the Petitioners Reply below.

NY State imposes SEQR, or State Environmental Quality Review, on all government agencies. these three town argue that the NYPA have incorrectly classified the vegetation removal as ‘type 2’ requiring no further action, and it should be classified as ‘Type 1’ which requires a full environmental review.

In this NYDEC document, it states ‘maintenance and repair activities’ are categorized as Type 2, not requiring any further action.

Classifying the SEQR Action is what appears to be center of the argument. Is it a Type 1 or Type 2 effort? The Canal Corporation says this is maintenance of existing water impound structures..it's raised earthen dams. Learn more about SEQR Type Designation with the link

Type I actions: Type I actions: are more likely to have a significant adverse impact on the environment than Unlisted Actions. May require a Draft Environmental Impact Statement. (DEIS)

Type II Actions:  Type II actions are a group of actions which either: do not significantly impact the environment, or are otherwise precluded from environmental review under SEQR.

The NYPA considered they were exempt from SEQR because the vegetation removal was considered ‘routine maintenance’, so quoted the work as a Type 2 Action.

Considering that most of the vegetation growing on the embankment is listed as a controlled or invasive species by the NYDEC, I would suggest there is a conflict here, but a full environmental review could bring these weeds to light.

In the end clearing embankments it's about two things...

Here's a list of INVASIVE PLANTS growing along the Fairport & Perinton Embankments:

While Cottonwood does not appear to be listed as an invasive species, it has some very undesirable properties making it entirely unsuitable to be grown on these steep embankments.

“One of the trees you should avoid having in your backyard is certainly cottonwood. Many homeowners prefer cottonwood over various other plants, given its aesthetically pleasant appearance and its low maintenance. However, the cottonwood has a very shallow and soft root system. Its wood is prone to rotting, making it very unstable during severe storms.

Aside from the fact that the tree itself is fairly brittle, it can also be damaged by insects and diseases, which makes it even more exposed to the elements.”

I did a spot count in one random area (opposite Grand Erie Way) and over 75% the trees on the Fairport embankment are Cottonwoods, which make the already dangerous situation even worse.  As these trees are prone to rotting, the roots could quickly provide ‘piping’  with subsequent failure of the dam.

Read what all the experts say about trees on embankment dams. 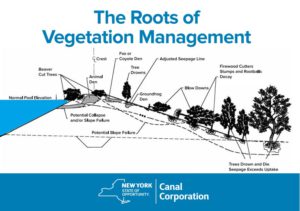