Is it an Embankment, a Dam, a Levee, a Ditch or Dike?

If you check your favorite dictionary, you’ll find a tremendous overlap in the terminology, so here we’ll define the different aspects for the sake of this discussion.

A DAM is a length of the canal where one side is constructed to contain the water over a low level area.  You could call it an embankment or an embankment dam, or even an earthen embankment dam, but we’ll shorten it to a dam. The prime reason for this name is that the method of construction is exactly the same as for an earthen dam. It will need the same care, and has the same failure characteristics as a dam. There are more engineering reports available on search engines for ‘dam’ design and preventative failure than for ‘canal embankments’. There is no other reason for this title. 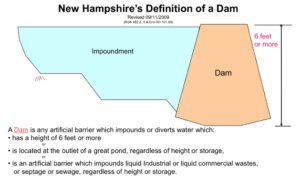 So, ‘The Great Embankment’ on the Erie Canal will be called here, a Dam.

Banks. Most sections of the canal are the excavation of a trench through the countryside, making it a huge ditch. We’ll call the sides of this ‘ditch’  banks, like the ‘banks’ of a river. These are not raised up in any way.

Culverts. In this Canal Embankment project, there are 57 culverts.  These are usually concrete tunnels, burrowing under the canal to allow low level streams to pass uninterrupted. In these situations, the canal will have a dam constructed on either side, as is is passing over the stream. In the case of the Bushnells Basin culvert, the walls and base of the canal have been reinforced with concrete.

Here is a photo of the 1974 incident where the concrete bottom fell out of the canal,  caused by some repair work to the tunnel, and fine sand as fill for the dam walls. Apparently, the sand washed out causing the breach.

Spillways. These are controllable dams, on the edge of the canal, designed to allow excess water to escape at a predetermined height. The water will run into a stream eventually. These areas have potential problems due to tree growth because the root systems can get into joints in the concrete and weaken the structure by heaving concrete slabs etc. This could eventually cause collapse of the dam wall and catastrophic flooding downstream.

Earthen Embankment Dams and Levees are ‘constructed embankments’.  Their main difference is in their hydraulic loading.

Earthen Dams are constructed ‘across’ a stream or river to create an impoundment of water.  This creates water storage, flood control and boating and recreational opportunities.

A levee is constructed parallel to a river or stream to prevent flooding of adjacent low-lying areas during periods of high water.  It is subjected mainly to tangential-hydraulic forces (scour- where the flow of water will be high and fast, resulting in erosion) whereas a dam is subjected to dynamic hydraulic forces (wave action) and little flow to cause scour.

The levee is also not subject to seepage causing phreatic line problems in the same manner as a Dam.

Dams have spillways to control water height, and eliminate over-topping, while Levees are designed to cope with over-topping

In most cases a Dam seems to be considered “full & functioning” always. A Levee can be working “at times” spending some time of its life wet and at others dry.  It doesn’t really matter because BOTH get treated identically. Vegetation Free is the desired, safest state

An Embankment Dam is placed across a stream or river, and has ‘hydraulic force’ pressing against it. (The weight of the water). There is no actual flow of water along its length that will cause ‘scouring’ or erosion of the banks.

There is a constant height in the level of the water, and upsurges are controlled by spillways, allowing the water to escape before it over-tops the embankment.

A Levee is usually not in use most times. It is designed to control water in extreme situations of flood only. It is placed along the banks of a stream or river. It can withstand over-topping. Due to the speed of water flow when in flood, the levee is prone to ‘scour’.

Vegetation reduces the effect of scour or removal of soil on Levees.

So this statement is most likely the best to describe the NYS Canal System Embankments:

Erie Canal Embankments are working Dams  in the Summer months and become empty Dams in the Winter.