You have asked... and here's the answers.

Questions about where the Erie Canal Neighbors Association found its Town & Village data and how we made the graphs have been coming in for a few days now.

Many canal residents want to know if what they are seeing is accurate...the answer is yes, this is what the data shows. To end the questions I will take a moment to explain how the ECNA was able to collect and display the graphs you are seeing in the Forum Board.

Thank you to all who commented or emails asking for "verification on our facts"... always make sure those supplying data can back up their claims.

Our goal at the ECNA, is to show if there is a case supporting the NYS Government Reduction Act along the Erie Canal. This 2010 NYS Law is trying to eliminate inefficient and unnecessary layers of lower government agencies, mainly Villages or Hamlets (if incorporated). We reasoned if the data doesn't support doing village reductions, it should show, but if the data supports Village Dissolution that should also be apparent as well.

And if reduction is the best answer for NYS Residents than the ECNA will back that effort fully.

Here's how we did our analysis... it starts with a Master Data Table 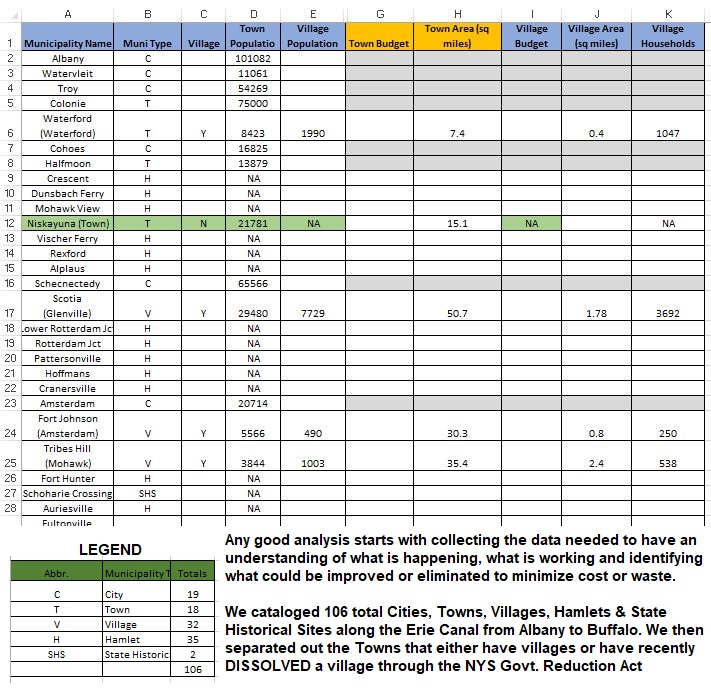 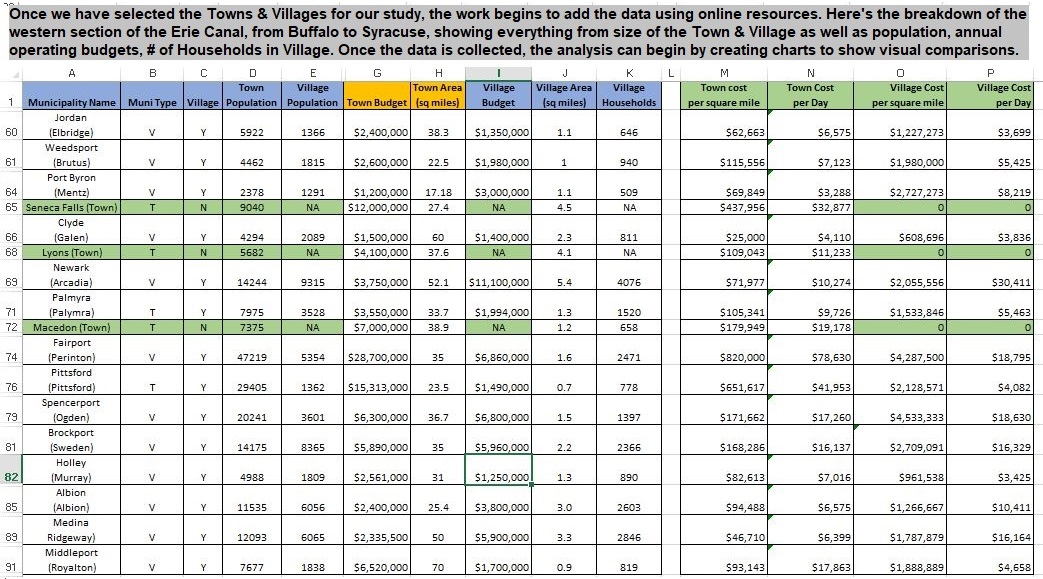 Once we have the data collected we start using Microsoft Excel Graphing to show what are outliers, data points that are far exceeding others in the same data set, on both the high and low ends. We used current data if possible, but also used Census Data from 2010 for population numbers. Wiki is a great source for Municipality sizes.

Town & Village budgets numbers are a mix of older years, 2017-18, and others are recent 2019-20. Most of that depended on how transparent each Town or Village was with their Annual Budgets. The ECNA did contact a few Villages for budget info as well since they were least transparent. While some Town & Village budget numbers may be off by small amounts the overall data will not be affected greatly.

Just want to be clear.. we didn't take budget numbers to the "penny" because pennies don't matter when you thousands of dollars are being wasted.

Here's what some of the graphed data look like... and we recently updated for the Village of Holley, NY 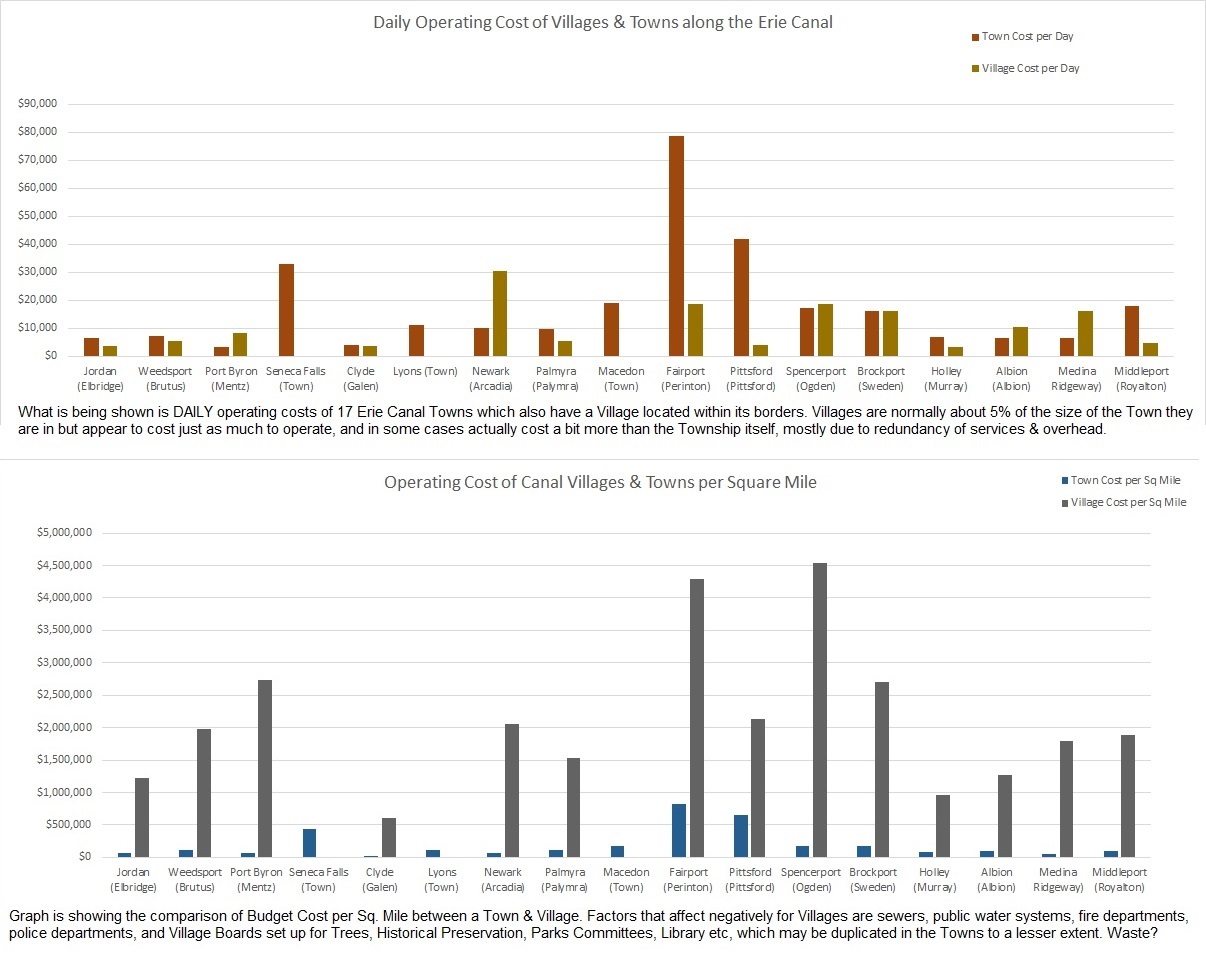 As you can see the numbers do not bode well for Erie Canal Villagers. Those graphs have very different monetary amounts, Thousands to Millions of dollars per Sq. Mile. Most Villagers along the Erie Canal, as well as Town Residents, rarely get a comparison view of how their towns stack up to others in cost, size etc. But if you were trying to understand if your tax money was being spent wisely & efficiently how else could it be done?

One of our favorite views of data is Cost by Resident...because at the end of the day that is what matters to a taxpayer household. And this graph shows EXACTLY why the State of NY came up with this Government Reduction Act. If someone bought a house in a Village, they are now trapped into much higher cost than the folks in the Town around them. Until the Govt Reduction Act their only recourse was to move. Now they can rally, petition the Village for a Dissolution Vote and start the process of making Town AND Village Taxes more equitable to all.

Here's more graph data that we like to show... it's a potential of savings based on historical numbers by simply dividing the Taxes Saved by the number of Households in a Village. Actual saving for Villagers would be based on the assessed value of the property used to create the current Annual Village Tax bill for each household... but it does show savings. And we also compared Towns to Towns & Villages in a special graph. 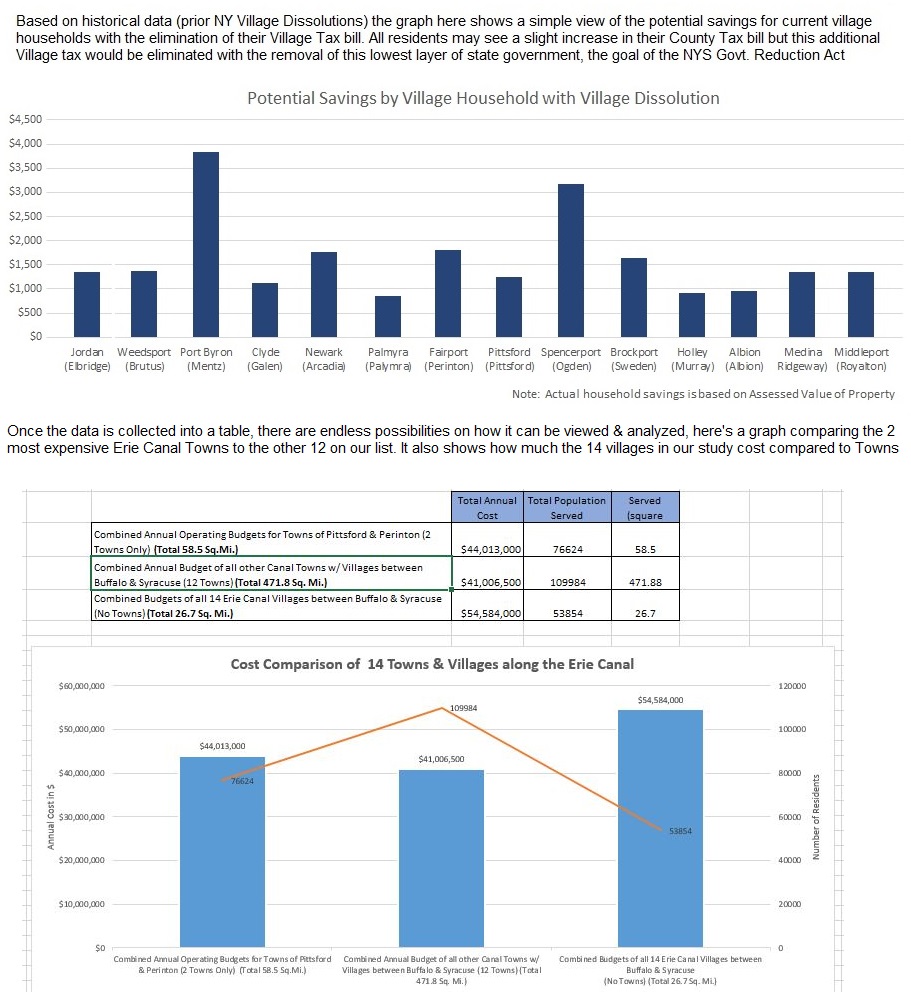 So there you have it... it's starts as an idea, it gets put onto paper, and data is collected. After that it just analyzing and comparing to see who operates the best, who's wasting taxpayer money needlessly and where changes and improvements could be possible. You can view the data like we do, make your own determination on what it means, but in the end the data proves, with doubt, that Village Municipalities may have outlived their usefulness and now have become an UNFAIR burden to those who live withing their small footprints.

Something to consider when residents & neighbors in your Erie Canal Village knock on your door asking for signatures to Support NYS Government Reduction and dissolve the village to stop the tax madness.