Here's a few postcards and pictures from Holley, NY. Home of an Erie Canal Waterfall 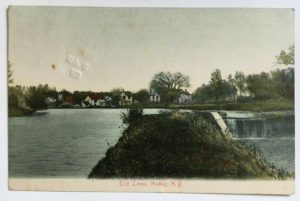 There used to be a side canal that went into Holley, it had a couple locks to lower the barges & boats dues to the height difference. Holley sits about 60 feet below the canal behind two large dams.

When they built the new NY Barge Canal (1919-25) this feeder canal was shutoff. They tried to seal it completely but over the years has developed a leak... that has become an Erie Canal waterfall called Holley Falls.

All of the trees you see, are on an Earthen Embankment Dam that is Unsafe according to the owners, NY Canal Corp. And it has a leak coming down it's face... that water heads to a dive culvert seen in the lower left of the picture. 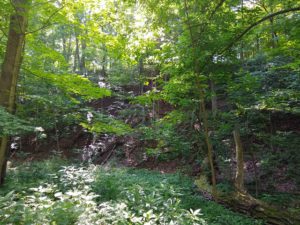