Some would say the short answer is YES!

The Phreatic Line is one of the favorite topics here at the ECNA, just ask Mike Caswell

If you look at the Perinton Safety Video, created by the Canal Corporation, they mention the issues with seepage and breaches. Most of this has to do with one part of a Earthen Dam that rarely get's discussed but should be.

This is what is driving all of the Embankment Integrity work along the canal, trying to keep water inside of it.

Here's a nice illustration showing the major parts of a Dam... note that the water being held back is shown with the bottom of the pool at the same elevation as the base of the embankment. This is the way most embankment dams are shown. 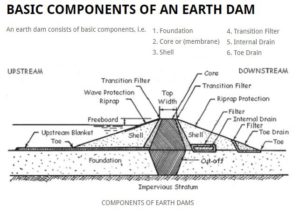 But the most important part isn't shown, it's that Phreatic line which is where the water is saturating soil and leaking out of the impounding structure. It is shown in the images below. 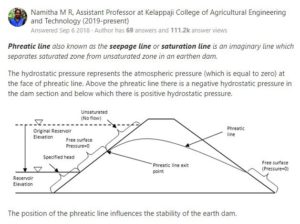 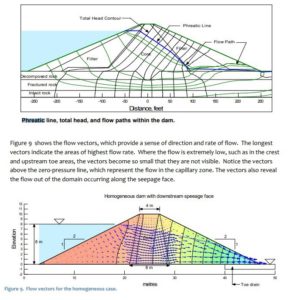 Why is this line so important? Well it's the root cause of internal embankment erosion that causes about 80% of all embankment failures. Here's a nice video on this subject of Phreatic Line or Surface.

The video above stresses that it's the saturated earth, and where it's most saturated that can cause dirt to just start moving. The Erie Canal uses a Toe Drain system which is the basic earthen dam method to control water leaking from the Phreatic surface. Its the ditch at the bottom of the embankments.

The image below (top half) shows what happens when the embankment gets over-saturated from internal erosion.  If the ground gets too wet the dirt starts moving and the result is a slump or sliding of the outboard slope of the embankment, seen in the bottom panel. 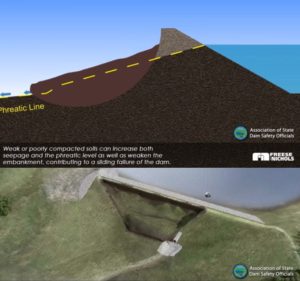 Are Canal Embankments more susceptible to this saturation being elevated?

That would seem to be the case. In all examples of dams the bottom of the dam and the bottom of the water share the same elevation plane. That is NOT the case with some of these raised canal embankments. Here's a better picture to understand what's going on with Phreatic Line, saturated earth and seems to show a much bigger issues with earthen dams if you lift all that water overhead.

Most of the embankments along the 125 miles that are raised, vary in height by the region they are in. In the western end, where almost 60 miles of the canal is across relatively flat, level ground, the canal embankments are between 10' and 25' tall.

There are exceptions though, like where the canal crossed a stream or river. The tallest embankment is in the western end section of the canal, about 78' tall. So take into account that the canal water level is about 4' below the crest of the embankment (trail) and the water is about 12' deep... you have all that water looming about SIX stories above the surrounding area below the embankment.

And it is saturating the earth all around it as long as there is water inside it.

And that should worry everyone living below these embankments, that have recently been classified as Unsafe Dams.

Leave a Reply to Douglas Kucmerowski